The original Passover was the night of the tenth plague when the Israelites were enslaved in Egypt. All the firstborn in every household that were not “set apart” by the blood of a lamb on the doorpost of their homes died (Exodus 12). An annual commemoration of being “passed over” was instituted by the Almighty:

“And you shall observe this thing as an ordinance for you and your sons forever. It will come to pass when you come to the land which the Lord will give you, just as He promised, that you shall keep this service. And it shall be, when your children say to you, ‘What do you mean by this service?’ that you shall say, ‘It is the Passover sacrifice of the LORD, who passed over the houses of the children of Israel in Egypt when He struck the Egyptians and delivered our households.’” ~ Exodus 12:24-27

You may have heard someone say that we can’t really keep Passover because there’s no temple in Jerusalem. That’s true… but it doesn’t mean we can’t “celebrate” it!

Passover starts at sundown, immediately followed by the Feast of Unleavened Bread from sundown (the first and seventh days are High Holy Days).

Has Passover Been Fulfilled?

Yes, Passover has been fulfilled.

A few days later, after his last meal with his disciples, which happened the evening before the Passover was sacrificed, Yeshua was arrested. Throughout the next day, as people prepared for their meals that night, he was questioned, beaten, mocked, and ridiculed, but officially declared faultless (John 19:6). Just as the Passover lamb was to be without flaw (Exodus 12:5), so was THE Lamb, the Messiah, flawless.

Finally, the people called for Yeshua’s crucifixion. As the Passover lambs were being sacrificed, the land became dark. Yeshua recited Psalm 22, and then, as the final lamb was sacrificed in the Temple, he cried “IT IS FINISHED,” bowed his head, and gave up the spirit, paying our debt.

For years, the sacrifice of lambs demonstrated the picture of a substitution for the price we owed for breaking the blood covenant with the Almighty. Finally, the Messiah came as THE substitution, redeemed us, and renewed the covenant.

What Does It Mean?

The events of Passover served as a prophecy for the Messiah’s sacrifice — the day the blood of “THE” Lamb redeemed us from sin. Passover is the ultimate celebration of our deliverance from sin (Egypt) through the sacrifice and resurrection of Messiah Yeshua! 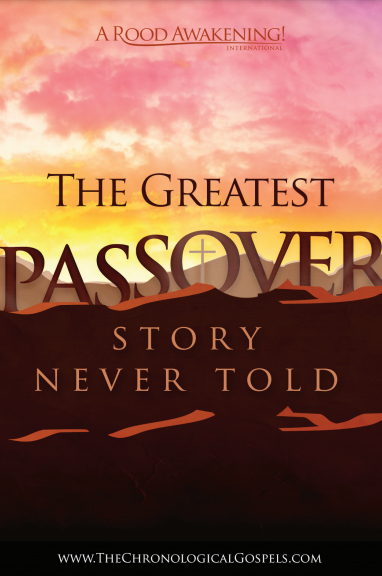 Get your free download of The Greatest Passover Story Never Told – an excerpt from Michael Rood’s acclaimed book, The Chronological Gospels.